A sampling of trail meals… 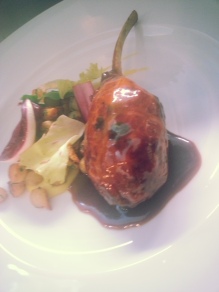 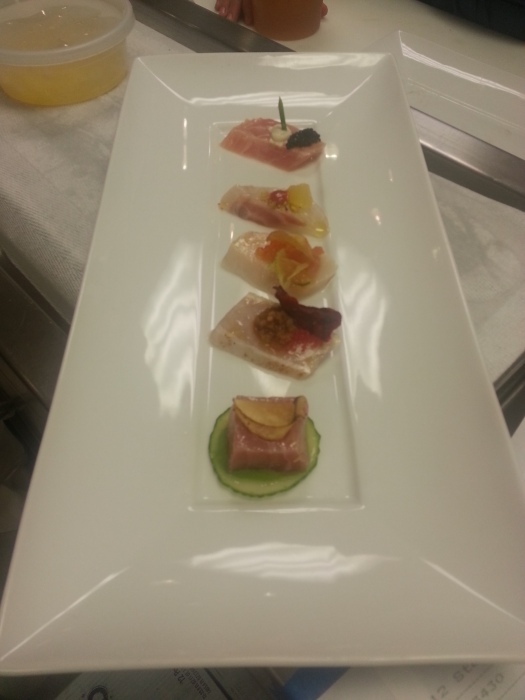 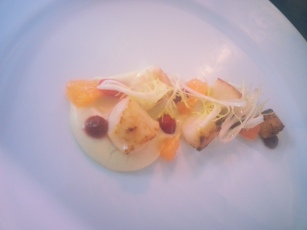 For most jobs, an interview is a conversation.  Often rather stale and bears little to no relevance on the work you will be doing.  The interviewer wants to ensure your credentials fit, you present yourself well and that you have whatever else he or she might deem necessary for the position. The interviewee may briefly tour the work area, talk to a few senior management guys and often not much else. He has no real idea of what the the day to day is like, what his potential coworkers personalities are- essentially he will be walking into the job relatively clueless.

To work in a kitchen you don’t interview, you trail or stage (both terms are often used interchangeably but stage can also suggest a type of internship.)  You generally show up around 2/2:30 and immediately are thrown into the mix of cooks and put to work.  Every kitchen is different. Most trail work is very basic, picking parsley or helping to prep whatever vegetable they may need for the night.  I’ve heard of mini “Iron Chef” competitions, in which one restaurant gives its trails several items and 1 hour to come up with a dish.  But that is certainly an exception.

Trailing is very much like dating.  And many cooks date around before they accept a job.  You probably have preconceived notions of what the kitchen will be like- is it intense or laid back? Bro-y? And as you work, your opinion begins to form.  Often the other cooks ignore you, some make light conversation, and occasionally they’ll joke around with you a little. You observe how they interact with each other and how the sous-chefs treat the cooks. Are the sous helpful or short and dismissive?

Prep ends around 4pm and family meal is put up. Despite frequent misgivings about the restaurant world, family meal is not a selection of the restaurant’s menu. We taste our food, but we certainly don’t dine on it. Family can range from whatever is cheapest and easiest to make- sloppy Joe’s and rice to slightly more thought out and themed meals of pork buns with homemade pickles. My restaurant always puts up a vegetable, salad, drink and dessert in addition to a protein and starch. I have found this selection to be rather exceptional.

During family, a meal that can last somewhere between 3o seconds to a whole half hour depending on the restaurant, you have some more time to get to know the cooks.  Family can be awkward, as you don’t really know where to go or sit.  In some restaurants the cooks are obligated to you eat in the dining room, others stand around the kitchen or find spots in various storage spaces to eat.  Often cooks joke around, though I’ve sat in family meals in dead silence. Those are fun.

After family, the cooks set up their stations and service begins. Each restaurant will allow its trail various levels of participation in service. Often you’ll help with the amuse-bouche (if they have one), maybe help plate a dish or two or you may not be allowed to do anything at all.

Service is generally the best part of the trail because you get to sample their menu. Some places are stingy and barely feed you anything but others stuff you silly, pushing you to the point of discomfort. It is glorious.  Being fed as trail is better than properly dining in a restaurant. It’s like being at the chef’s table except with zero barrier and even better zero cost to you other than your day’s labor.  (Given what most of these places charge for dinner and what the average cook gets paid, it’s a bargain!)

Often cooks will trail at restaurants just to try the food, without any desire to work there.  Some kitchens, if they are not hiring, offer observational trails, where you are literally not allowed to work and just stand there for the evening and eat.  You feel slightly helpless at first, but once you embrace it, it’s awesome.

Generally around 10 pm or so, the more senior chef will take you to the office and discuss employment.  If they like you, most places will just offer you a job on the spot.  I always found it crazy that after a day of usually the most menial tasks possible, they could decide whether to hire you or not.  (Note that this rule is not true for every kitchen.  As I mentioned places like The French Laundry will give their trails a duck, bass and beets and expect them to make three courses each by set times.)  I suppose all hiring is a leap of faith and let’s face it, there seems to be a shortage of cooks! From what I’ve gathered, hiring is also based on the impressions the other cooks got of you while you prepped with them.  Regardless, I was initially shocked each time I got a job offer.

After the employment talk you are free to go home. Don’t. Well not if there is any chance you may work at that restaurant.  As one of my favorite cooks said to me on my trail at my current restaurant, “You gotta stay and break down, then go out for drinks with the cooks and really hear about what it’s like to work there.”  He also says that if you don’t, well at least stay till the end, he won’t respect you if you come to work at the restaurant.

After you’ve trailed at enough places, hopefully you’ll find a place that fits.  One where you’re inspired by the food and the cooks are crazy enough that you’ll commit to spending the next chunk of your life with them. Enjoy!

Poke, canals and dogs with tudes. Hello LA
Fully loaded #meatandgreat someone was excited...courtesy of @butcher_box
Happy Halloween! This is what happens when you have a cookie decorating competition at work...thanks!! @pinterest @nestleusa
The best meals are shared :) and with a lil butter or heavy cream...
So excited to be part of this family! @biggayicecream
Mary had one and then we did too... happy qi @lu.shaun