Me picking figs off trees in front of our hotel 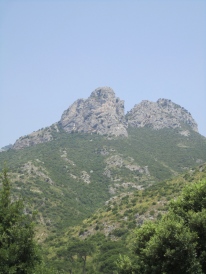 The Beach at Cetara 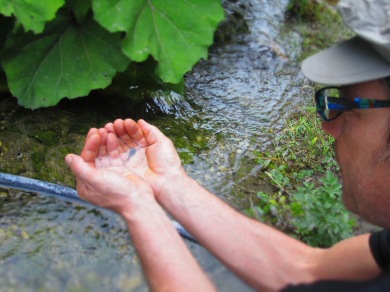 Gennaro Showing us a Tadpole

A few years ago when I was living and working on an agriturismo in Tuscany, I took a weekend trip to Parma for its big food show Cibus. Thousands of food producers display at Cibus, including the largest Italian companies, but also the small guys who are new to the market. These artisanal producers are what make the show so exciting, well them and getting to see the largest mortadella in the world (it was really big!)

Among the newcomers, I was impressed by a beautiful glass blown bottle filled with mysterious liquid.

It was colatura, fermented anchovy liquid.  I had heard of colatura before, but had never tried it.  My new buddy Gennaro, the colatura’s producer, invited my friend and me for a quick lunch in his booth.  After serving us each a glass of Prosecco, we were first presented with the most delicious anchovies I had ever tasted.

Let me preface this experience by saying, I used to dislike anchovies. This dislike I soon realized was because I had never had great anchovies before. That day changed everything. After the anchovies came a plate of pasta.  While it looked like plain spaghetti, it was anything but. With my first bite came a wave of salt, fish and crazy mouth feel. It was addicting. Gennaro explained, it was simply tossed with a little crushed garlic, olive oil and colatura.

I knew I had to buy a bottle, but at Cibus vendors weren’t allowed to sell their goods. Gennaro apologized and suggested I come to his restaurant in Cetara, on the Amalfi coast and buy a bottle there. So I did.

Two months later, my friend Kathleen and I found ourselves in what we discovered to be the most perfect little coastal town. Cetara, unlike its neighboring towns of Amalfi and Positano, is untouched. We stayed at the one B&B in town- it was 50 euros a night and even had air conditioning, which basically made it a luxury hotel.

The morning after we arrived, Kathleen and I walked down the curvy mountain path to the town. The town itself is really just a street. It has about 3 restaurants, a drug store, a few convenience shops and not much else. We rented a small paddle boat and spent the morning paddling, swimming and napping in the Southern Italian sun. 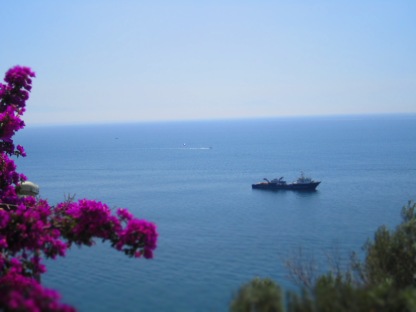 View from our little B&B

Then it was time for lunch. We walked into town and sure enough there was Gennaro, standing in front of his restaurant. Much to my surprise, he recognized me and invited us in. (We had only met that one time, several months before.) “Mangiamo qualche acciughe,” he said, meaning, “Let’s have a few anchovies.” Before we knew it, we were sitting down in the private dining room of his restaurant, drinking Prosecco and wine, in tank tops and bathing suits, eating a six course meal. Anchovies upon anchovies. Colatura bruschetta. Delicately fried zucchini flowers. Seafood pastas. Seared local fish.  And gorgeous pistachio gelato. You know, lunch. 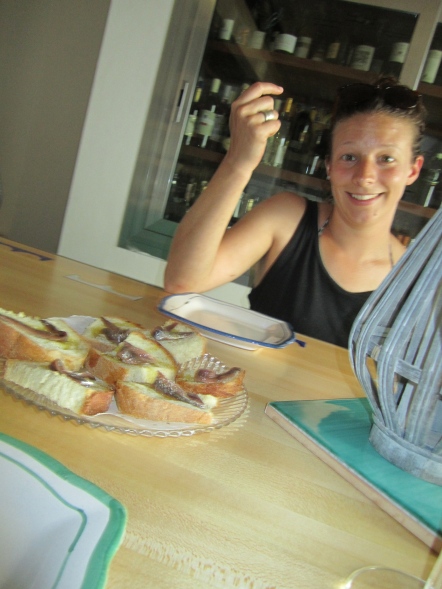 Kathleen at our super fancy lunch

Gennaro, wearing a pajama-esque get-up, then insisted on taking us around town and showing us how his colatura is made. Being the trusting girls we are, we said “Sure!” and hopped into his yellow VW Beetle.  Gennaro first took us to see the colatura production. Each day over the summer fresh anchovies come in from the local fishermen and are salted and packed into wooden barrels and then pressed. After months pass, usually in December, the make a whole in the barrel and the beautiful amber liquid that is colatura slowly drips out.  One of the local producers Delfino made a video showing how its done.  It’s a bit slow but shows you Cetara and the overall process.

The rest of our stay was a series of more elaborate meals and trips to the town of Amalfi and into the mountains (see pictures above). The whole experience was so whimsical and magical.  It also confirmed that if you are two young girls in Italy, anything can happen.

I have since brought colatura back to the States and cook with it at home, mainly in that same simple spaghetti dish but also in certain salad dressings, fish and meat seasonings or mixed with mayonnaise as a dip.  We also use it quite regularly at Marea, in our cucumber mignonette and in a vinaigrette for one of our fish appetizers.  The two main brands you can find in the States from Cetara are Delfino and Nettuno (of the two I prefer Nettuno, but it’s harder to find.) Sadly, while Gennaro’s colatura has made it to certain parts of Europe, it has yet to make it to the US.  I think getting a bottle for your pantry is enough of an excuse to pop over to Cetara. I guarantee the journey will be worthwhile.